Noah`s deluge in our classic poetry 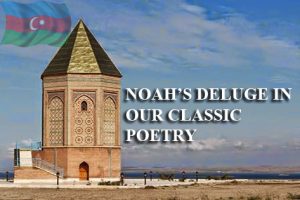 Reflection of the legend about Noah and Noah’s Deluge, being the subject for discussions during a long time in classic poetry of Azerbaijan is stated in the article with concrete facts. There attract attention analyses conducted basing on creative works of the men of genius, such as Nizami, Fuzuli, Nasimi, Shah Ismayil Khatai, Seyid Azim Shirvani and Abbasgulu-agha Bakhikhanov.

As is known from historical sources, it is asserted that the ancient Nakhchivan dates from the period even earlier than the times when Prophet Noah lived, and there are assumptions that one of interpretations of Nakhchivan toponym is: it is connection of the words “Nuh chikhan” (“Noah’s settlement place”). According to the legend that reached us passing through centuries in memory of the people, when the Earth was flooded as a result of the worldwide storm that occurred about 7500 years ago, the Prophet Noah’s ark with the members of his family, and the people who expressed belief in him, having floated in the sea during several days, had got on the land in Nakhchivan territory: a few people who had escaped the Deluge had settled here, and new generation had been procreated and brought up here: that is why this territory was named “Nuhchikhan” – “Nakhchivan”.

There have been published weighty enough scientific articles of either foreign specialists or eminent historians, archeologists, philologists, ethnographers of Azerbaijan regarding scientific explanation and historical substantiation of this legend, and there attracted attention interesting conclusions about ancient history of Nakhchivan, as well as relation of Nakhchivan toponym with Noah, made by Joseph Flavin, the eminent historian who lived in the I century B.C., Claudy Ptolomey – the ancient Greece scientist, Moisey Khorenski – Albanian historian who lived in the V century, Stephan Orbelyani – the historian of the Middle Ages, Al-Sharifi – the eminent Arabian scientist and geographer of the XVI century, researchers of the recent years I.M.Sisoyev, K.A.Nikitin, I.M.Dyakonov and other distinguished scientific workers. Also according to scientific conclusions of the eminent Azerbaijan scientists R.Mammadov, O.Afandiyev, A.Akhundov, M.Seyidov, I.Habibbayli, I.Hajıyev, Mashadikhanim Nemat, V.Aliyev, A.Huseyni, L.Huseynzadeh, H.F.Safarli, G.Gadirzadeh, V.Bakhshaliyev, A.Gadimov, F.Rzayev and others, relation of Nakhchivan with Noah has been approved by neat facts, it has been also proved that after well-known worldwide deluge Noah lived in Nakhchivan, and his grave is in Nakhchivan. The eminent enlightener K.A.Nikitin, who worked in Nakhchivan schools in the 80s of the XIX century, noted in his article “Nakhchivan City and Nakhchivan Area” (12. pg.2) that Noah’s grave was located in Nakhchivan, even he saw it with his own eyes, and Bahruz Kangarli, the founder of realist painting of Azerbaijan, painted the picture of the tomb on the Noah’s grave from nature (6 times from different sides).

The order of the Chairman of the Supreme Parliament of Nakhchivan Autonomous Republic “About restoration of Prophet Noah’s gravestone in Nakhchivan city” dated from June 28, 2006 and the works done in related with that order also confirm above stated again. Taking into account that there are enough scientific proofs concerning Noah and Noah’s storm we thought reasonable to conduct researches on the direction of the way of attraction of this topic in classic Azerbaijan poems.  Looking through our poetry samples which were created within time period of about thousand years that passed since time of creation of classic poetry of Azerbaijan it becomes clear that most of eminent Azerbaijan poets, starting from Khagani, Nizami up to the present time, touched topic about Noah, expressed their real attitude towards this historical event that turned into the legend by power of artistic word.

One of the most prominent representatives of classic poetry of Azerbaijan Khagani Shirvani in his well-known poem “Tohfatul-Irageyn” speaking about his father Najjar Ali, highly appreciates his throne of inspiration that he could build thanks to education got from his father, considers it more valuable than gold, and writes that just Noah deserves to accept that throne:

Azerbaijani poet of genius Nizami Ganjavi in the section called “Impudence of people of nowadays” of his “Treasury of Secrets” poem touches very interesting moment concerning Noah. According to the religious legend, when Noah who was a carpenter, declared himself a prophet at the age of 50, most of the people did not believe in him and negated him, that is why he took in the ark made by him just his family members and the people who were closest to him. Nizami Ganjavi in his “Treasury of Secrets” identifies the people who did not believe in him, in his fresh words, with Noah’s generation who negated the prophet (2, pg. 90):

In Fizuli’s poetry the theme about Noah is used even more, describing complaints about modern period, injustice against people, it is said that course of the world had got more choppy essence as it was at the time of the Noah’s storm. The Noah’s storm is described as a small drop in the choppy, wavy world. Moreover, according to the poet’s conclusion idlers who spend their life senseless cannot swim over this sea, no matter how hard they fight trying to swim, and they drown among rage waves of the sea of life. Fizuli described the above stated philosophic conclusion in one of his odes like this:

In another ode Fizuli, speaking about an old, noble man describes his might, saying that he can even give information about Noah’s period. Thereby, the expressions “Noah’s epoch”, “Noah’s period” used nowadays had been used in the period of Fizuli at the same order as well, and as Noah’s period was within Fizuli’s interest sphere, he used that expression in his poems:

One of the poets in classic Azerbaijan poetry who touched the theme about Noah is Shah Ismail Khatai. In his work “Dahname” there attract attention various distiches and hemistiches about Noah’s longevity, his rescue in the ark during the storm, Noah’s great belief in his aim. Among such examples given in “Dahname” by Sh.I.Khatai we can show the followings:

In classic poetry of Azerbaijan Noah and Noah’s storm turning into measure, touchstone of time, stays on the basis of comparison of goodness and harm, white and black, bitter and sweet, death and life, and the masters of word approaching that topic from different aspects describe Noah as a rescuer divine power, and the Noah’s ark – a mission executing that rescue. Moreover, a man who reaches the happiness of getting in the Noah’s ark in symbolic meaning feels very happy, protected from and unaware of all storms in the world. In connection with this Saib Tabrizi writes in his ghazal with the radif “Yoxdu mənim” (“I don’t have”):

In classic poetry of Azerbaijan from one hand there are those who consider Noah rescuer and seek for his help, and others describe that their sorrow and pains during grief are not less than Noah’s sorrow and pains, their tears shed because of torments of parting with lover can flood all the world as it was during Noah’s storm. This claim is attracted in ghazal with the radif “Aparir” (“Takes away”) by G.B.Zakir (6, pg.152):

S.A.Shirvani, who with his moans because of plenty of sorrow symbolically makes fate to feel for him,  also writes that with his tears shed crying of grief and sorrow finally he makes a storm as great as Noah’s storm:

Khurshidbanu Natavan’s ideas concerning Noah are also identical with the ideas of S.A.Shirvani. But in contrast to S.A.Shirvani Natavan does not feel sympathy of fate, but complains that there is nobody who knows her grief, and she declares that she made her blood and life remedy for her grief, and with her tears she made a storm like Noah’s storm:

Heyran Khanim complaining of plenty of sorrows also describes that her bloody tears made a storm like Noah’s storm, and calls man whom she relies on to feel this storm like Prophet Noah and to know about her grief:

A.Bakhikhanov, who during his activity imparted higher moral qualities, such as honesty, purity and divinity, and departing this life was buried in a divine place by his own will, had views about Noah that differed from views of his contemporaries. He thinks that if he falls in love with a cruel beauty he will face a storm as Noah, but the storm created from tears, and remembering that all his life he lived honor, he damns himself saying that if he goes astray, let his blood to flow on aim:

It is interesting that in ashug poetry, being integral branch of classic Azerbaijan poetry, Noah and Noah’s storm was on the focus as well, creators of our ashug poems expressed their attitude towards this topic. One of the well-known representatives of ashug poetry of the XVIII century Khasta Gasim in his goshma (a form of an Azerbaijani poem) by name “Insan” (“Human”) speaks of frailty of the world, resembling names of the great personalities such as Noah, Iskandar (Alexander), shows that the world was not faithful to them as well, and calls his contemporaries to do good:

Very eminent representative of ashug art of Azerbaijan Ashug Alasgar also in one of his goshma-mustazad (a form of an Azerbaijani poem) put forward interesting, precise scientific considerations about Noah and Noah’s storm, that are still disputable for science at present time, and have not found exact scientific solution yet:

There were put forward interesting considerations about Noah and Noah’s storm in creative works of M.A.Sabir, H.Javid, M.Hadi, and other poets being the eminent representatives of classic poetry of Azerbaijan of the recent period, and all these prove again that every historical event is attracted in the literature, as well as in the poetry that are the mirror of life.