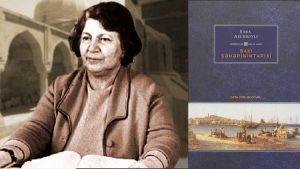 Baki, one of the ancient cities of Azerbaijan, was known in Near and Middle East from the Middle Ages. Its economy was formed by oil and salt production, madder and saffron cultivated in Baki and Absheron region. Their export to the far Eastern countries both by caravan ways and seaways was the important factor of development of the feudal city. […]

The Land of Inimitable Monuments

The Prophet Noah’s grave was found With the joy of this news I went to Nakhchivan in the end of December last year. Together with the organizers of the international “Gamigaya” expedition: well-known academicians, deputies, the chairman of Nakhchivan department of the Azerbaijan NAS (National Academy of Sciences) Ismail Hajiyev and the rector of the Nakhchivan State University named after […]

Meteorological and Cultural Influence of the Deluge on Nakhchivan

Since earliest times, as a result of struggle of the primitive people against natural forces, various myths and legends had appeared, and religions and in the sequel different philosophic currents had been developed. Though many legends had real roots, during centuries human imagination rendered them fantastic. Owing to these causes researches for determining, if those myths and legends created by […]