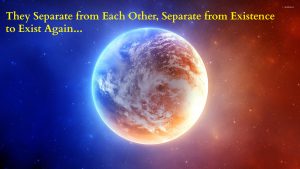 They do not move away from each other!
Everything stays around its Prime!
It cannot move away from “It”, does not be far from “It”!
It does not be its repeat!
Separated one becomes like itself, becomes Itself!
There is nothing that does not separate?
How it would not separate?
Every separated one Itself becomes a Creator!
Because, It does not disappear!
They cannot disappear, as “It”, Prime Itself, being Eternal cannot Disappear!
Created, Creating, Creation, going to be Created cannot Disappear from Absence, but can Exist from Existence!