The Low of Timeless – Untimeliness… 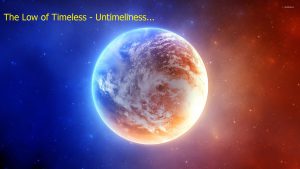 As far as we consider all States, all Consequences, all Structures, all Speeds and Motions, we see that they are in Unstoppable, Interminable Condition!

And there have to be reasons of such a structure of all these!
But what are and where are the reasons?
Referring on astronomy and astrophysics, Astronomy science has such a conclusion that the Universe exists during 15 billion years, our Sun System and the Earth – 4,5 billion years!
Astronomy has also such assertion that the light of the Stars that we see on the Sky at nights, detached from those Stars hundred thousand years ago, and that light of them reaches us just now!

This assertion is wrong fundamentally!
For the reason that the all Conditions, the all Speeds and Motions are within a Moment, they fit into a Moment Dimension!
Because whatever we see, any Object that we see, or the all Stars System that we see on the Sky at nights are in Timeless – Untimeliness, in a Moment’s Vision, so we see them in this Moment, in their Moment!
If to take as basis astronomers’ assertion about that if the Light which once detached from those Stars, that Light, reaches the Earth just now, after hundred thousand years, if it reaches us now, and if we see that Light now, then Time-Period Rules in the Universe!
If Time-Period Rules in the Universe, then our appeal to God, Creator, Allah, our address to Him have to confine to Time-Period!
If we call for God, Creator, Allah today, at this moment, at present time as “My God, help me, my God, merci” – and if our appeal reaches “Him” after hundred thousand years, then why we should call Him and bother Him?
If my Call remains between heard and unheard after hundred thousand years (as it is impossible to live even 200 years), would there be any point in appealing to Him?
Every our Call, every Exclamation, every Desire every Thinking, every Complaint, every Concern, every Regret reaches Him, is known by Him in a Moment!
As “He” and the all Universe are in Timeless-Untimeliness, every our call reaches Him from Timeless-Untimeliness!
Because of very Simple Reason we can come to such Conclusion that everything occurs in Timeless-Untimeliness, in a Moment!
Death occurs in a Moment!
A stone falls Easily from Height in a Moment!
Joy – occurs in a Moment!
Good news comes in a Moment!
Speed and Stopping happen in a Moment!
Love comes in a Moment!
And Hate and Damn also occur in a Moment!
Belief and Suspect – in a Moment!
And True-Lie – in a Moment!..
Because all these happen in a Moment!
And every Moment is in Timeless-Untimeliness as well!
The Absolute Master of the Universe , “He”, Who is in Light, the Owner of Light , does not confine to Time and Period!
Eternity does not confine to Time-Period!
From which Time-Period had we come on the Earth?
We do not know!

In which Time-Period will we return to Eternity from the Earth?

We do not know too!

Any appeal, any Call addressed to the Universe is such a Light!
Light sees Light in an Instant!
Not earlier and not later!
Light sees Light in an Instant!
For this reason the texts of the all Sacred Books do not confine to Time-Period!
In spite of that, those Texts had been sent on the Earth thousand years ago!
If we read those Texts now, we will have such impression, it will seem to us, as if those Texts have been said right now, just a little time ago!
Because those Texts had been said from Timeless-Untimeliness, those Texts do not confine to Time and Period!
Every state, every Light Portion departs from any Mass, any Matter, any Particle in an instant, and is seen just in that Instant, in own Instant of Light!
It happens no earlier and no later.

The Light Portion Sparkles in its Instant and is Seen in its Instant!
If it was not like this, it would be pointless to show direction of the shore to ships during storm giving Light signal by Lighthouse from the Shore. If Lighthouses would not help ships to moor, then what sense would have those Lighthouses built on the shore?
If the Light Power detached from a Lighthouse would “Reach” those ships not in a moment, but after “thousand years”, then what significance would have that Lighthouse giving Light from shore?…
Cos every detaching Light Portion Detaches in its Moment, and Seems in its Moment!
Cos Creation of the Universes started, was generated from the Moment of Light Shine from the Great Explosion!
Don’t think that Light is simple!
It is a Shining Light Portion!
It is seen, known in Instant, all over Universe in its Moment!
All beginnings are from Light, It is from Light Portion of the Great Explosion!
Those detaching from Light, from White Light, is Light too (Spectral Colors), it is Unstopping, Interminable, Propagating, Generating, it is Generator of Color Variety in Colors!
Don’t think that the Universe is simple, it is in Instant, It is a Carrier of Light in a Moment!
Don’t think that Word is simple!
The Word is in Instant too, it is Light Carrier too. The Word is heard in a Moment all over the Universe!
Don’t think that Thought is simple!
Every Thought Turns into Light Frequency, it is Known in a Moment all over the Universe!
Don’t think that Desire is simple!
Every Desire is in an Instant!
Every Desire spreads in the Universe in a Moment!
All Desires are Analyzed, Known, Heard in the Universe!
There are Desires that Help us!
Good Desires are Accepted!
There are Desires that are Bad!
They are Analyzed, are not Accepted, return to ourselves, and Bring to us just “Pains”!
Every State is Unstoppable, Inseparable from each other, is with Light, in a Moment!