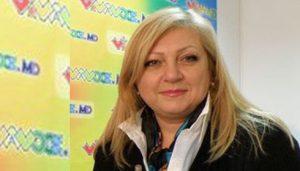 Moldovan Ombudsman: “Yerevan lesson of European standards will be a memorable one for me”
Tabula Rasa

The German edition of «Tabula Rasa» published an interview by the journalist Stefan Gross with Moldovan Ombudsman Aurelia Grigoriu. “Vestnik Kavkaza” publishes an unedited translation of the interview.

– As the Republic of Moldova has set a goal to build a democratic state of law, respect for human rights and fundamental freedoms should be the basic guiding principle. This principle requires that each person who holds public office shall respect the dignity of each individual citizen and respect the principle of equality as a legal foundation. In addition, each person should have the opportunity to challenge the decision before an independent and impartial court.

Despite the fact that Moldova was able to achieve some success in this direction, the level of development of democratic institutions and the human rights situation are still far from European standards. Human rights violations occur regularly in Moldova at all levels of government. The main reasons for this include the dominance of corruption in the judiciary, lack of effective management (Good Governance) in the state structures and the absence of an independent press. Neither the court nor the police and government agencies can ensure the protection of the ordinary citizen to the extent necessary.

The EU is trying in various ways to support the integration efforts of Moldova, for example, through the provision of loans and other assistance. Despite these efforts of the Europeans, in Moldovan society there is no improvement of the situation. The standard of living, social security, access to healthcare and education are areas that cause the most concern. Inadequate reforms worsen the human rights situation.

In my view, the violation of human rights by the state threatens the process of European integration of Moldova. At the same time, I hope that in the future the situation will improve.

– The EU is also negotiating the conclusion of an association agreement with Armenia. Taking into account recent developments (for example, the debate on Sahak Nikogosyan’s case in the Bavarian state parliament, as well as your recent visit to Armenia), do you think that this country is ready to conclude an association agreement?

– Construction and development of democratic institutions remains a long-term goal of post-Soviet states. A lack of democracy and human rights violations continue to occur in these countries. In addition to the so-called “frozen” conflicts, this is corruption, “legal immunity” of government representatives, imitation of democratic processes and large-scale violations of human rights.

Based on my stay in Armenia, which is my own experience, I can say that it would be wrong to talk about applying European values such as the rule of law to this country. National interests both within the country and outside it are there in the first place.

Despite all the talk about the rule of law and human rights, Armenia has demonstrated that human rights are not respected there. In addition, on the part of government officials there is no desire to improve the situation – and in the near future, nothing is likely to change. Otherwise, how else can you explain the actions of the Armenian government in relation to me, a woman, and the Commissioner for Human Rights of a foreign country?

Having started the persecution of me after my speech in the Parliament in Yerevan, Armenia deliberately chose to violate fundamental principles of human rights. Publications in the Armenian press about the need to control the lawyers, ombudsmen and human rights activists entering the country speak for themselves. While the population of Armenia responds to the free expression of opinions by threats of physical violence, it is necessary to think over the question of whether the country is ready for an Association Agreement with the EU.

I believe that the Council of Europe will come to certain conclusions. It is necessary to distinguish between the imitation of European values and their actual use in practice in daily life. To my great regret, political leaders are still very far from the use of European values in everyday life.

– As you know, international documents signed by the majority of European countries, including resolutions of the UN Security Council, the UN General Assembly (2008), the “Draft PACE resolution” (2013), clearly state the occupation of Azerbaijani territory by Armenia. In my opinion, the conflict could be resolved if Armenia takes effective measures to respect human rights, to implement the resolutions of the UN and to respect the territorial integrity of another member of the United Nations – Azerbaijan – in its recognized borders of the United Nations.

– What are the central differences between the Republic of Moldova and Armenia in the implementation of European values?

– The main difference, in my opinion, lies in the fact that the Republic of Moldova, in contrast to Armenia, is committed to work on the implementation of European values, both at the national and international levels. Armenia is putting its purely national interests above the canons of European values, thus violating democratic principles and human rights.

– Tell us about the events related to your stay in Armenia in early July this year.

– I arrived in Yerevan on July 4, 2013 to participate in the “European Scientific and Practical Conference”, the theme of which was “European standards of the rule of law and limits of the discretion of the authorities in the member states of the Council of Europe.” The presentation which I performed was called “Respect for human rights on the territories of “frozen” conflicts.”

As you know, the European human rights standards are enshrined in the relevant legal standards prescribed in the documents of the European community, ensuring their implementation in all circumstances. Based on this, I “risked” identifying human rights violations on the territories of “frozen” conflicts. My goal is to prevent future similar violations of human rights in these areas and ensure that there can be only peaceful means to resolve these conflicts. In my report on Georgia, Azerbaijan and Moldova, I was referring to the international instruments, the publication of the association “Promo-LEX”, as well as the proceedings of the international conference “The Academy of Public Administration” under the leadership of President of the Republic of Moldova (2012). My interpretation of the Armenian policy of aggression against Azerbaijan is fully consistent with the content of the four UN Security Council resolutions (№ 822 (1993), № 853 (1993), № 874 (1993) and # 884 (1993) and Decree number 62/243 (March 2008) of the UN General Assembly.

After the speech, I realized that the principle of the rule of law, which is one of the key components of human rights and fundamental freedoms, is not applied in Armenia. Already directly at the event, which was held at Parliament House, false accusations of political bias and dissemination of Azerbaijani propaganda were voiced against me. (It should be noted that the Vice-Speaker of the Armenian Parliament Ermine Naghdalyan encouraged participants from more than 30 countries around the world to condemn my performance in the final document of the conference, but this initiative was not supported.)

In addition, measures were taken to “punish” me for my speech. In my hotel room I received calls with threats of physical violence. My Facebook page was inundated with threats and insults. The Armenian media have published my photos and articles calling for the use of violence against all human rights defenders. Leaving the country was difficult for me. And when the driver refused to drive me to the airport, Mr. V. Pops, a judge of the Constitutional Court of the Republic of Moldova and a member of our delegation, left me in a situation that threatened my life. Only at the insistence of Romanian (Romania as an EU member) and Georgian diplomats was I allowed to leave the country. The Yerevan lesson of “European standards” will remain unforgettable for me.

In Armenia, people often speak of the rule of law. Nevertheless, the provisions of the European Convention on Human Rights and other international agreements are regularly violated there. Being a member of the Convention on Human Rights, Armenia has committed itself with the strict observance of the fundamental human rights. In my case, Armenia has violated the following articles of the convention:

Article 1 – Obligation to respect human rights
Article 10 – Freedom of expression
Article 14 – Prohibition of discrimination
Article 2 of Protocol number 4 of the European Convention for the Protection of Human Rights and Fundamental Freedoms – Freedom of movement.

After my return to Moldova I still receive new threats, in particular, from Armenian citizens of the United States, a country that is considered the cradle of modern democracy. The Armenian diaspora has attempted to make me resign from my post. The relevant claims have been submitted to the Standing Committee of Parliament on Human Rights and Ethics:

Speaker of the Parliament of Moldova Igor Corman said: “Grigoriu has damaged the country’s image.”

Chairman of the Parliamentary Commission Mizin said: “Grigoriu’s presentation is unprofessional and does not reflect the position of our country.”

The question arises whether such statements comply with the position of Speaker of Parliament and Chairman of the Parliamentary Committee on Human Rights and Ethics of a country which signed resolutions of the UN Security Council and the UN General Assembly. These resolutions have condemned the policy of aggression of Armenia, and the territorial integrity of Azerbaijan is recognized there. Most Moldovan media followed the Armenian publications without a realistic assessment of the situation and the study of international documents which formed the basis of my speech in Yerevan. The Moldovan press, calling my moral character into question, does not comply with the principles of balanced reporting. Insults addressed to hurt my image and my dignity are a humiliation.

To my great regret, I was not protected by my government against such attacks. State structures, the constitutional responsibility of which is to protect the rights of their citizens, do not resist violations of their citizens’ rights from Armenia. At the international level, between Moldova and Armenia, the violation of fundamental human rights against my person is deliberately hushed up.

– What kind of reaction do you expect from the German, European and international organizations in connection with the incident?

– I want to emphasize that the purpose of my speech in Yerevan was to draw international attention to human rights violations in the area of “frozen conflicts” – especially in states aiming for membership of the “European family”. My speech is to be understood as a call for peaceful conflict resolution and respect for human rights.

I hope that the European and the international community will properly appreciate the actions of Armenia and come to the conclusion that with regard to my person human rights were violated, and that they continue to be violated in my homeland.

I also hope that my performance will be interpreted as a call for the implementation of European values. In every situation and for every citizen, observance of human rights should stand centre stage.