Some words about “Molla Nasreddin” journal and teaching problems 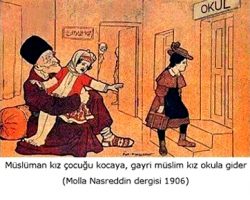 The first number of Molla Nasreddin journal was published in 1906, April 7 in Tbilisi. It has been issued in 1906 – 1918 in Tbilisi, in 1921 in Tabriz, in 1922 – 1931 in Baki. The editor and author was Jalil Mammedguluzadeh. Entering the living sphere and being led by the open minded intellectualist as J.Mammedguluzadeh rejoiced the liberty friends heartly.

The most modern revolutionary problems of Molla Nasreddin period were occupied along with the troubles of the Azerbaijan people, which had been continued for thousands years. The religious fanaticism was more serious than the other troubles. The importance of Nasreddin Hoja’s historical struggle elucidated the disformities of XX century Azerbaijan life to the people comedically. Spreading to the countries as Turkey, Iran, Egypt, India, Fas the journal influenced the peoples’ social and civil development positively.