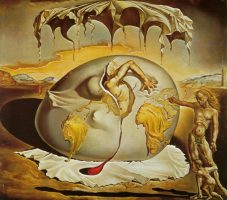 History – is the mirror of the past and the support and direction point of the future. We, most likelywould not be mistaken havig expressed it like this.

As human consciousness develops, his interest in history, his desire of learning his past grows even more. Certainly, it is not without reason that, after all, human have always been interested in the way of his creation with diligence.

We have been thinking during millions of years how and under which conditions we humans had come to the world? The answer of this question became more significant after insolvency of the Darvin’s Theory.

There are hundreds of assumptions about human’s creation. But the theory, opinion and supposition based on more frequently is religious approach, of course. “Adam’s expulsion from Paradise”, and the second creation by “Noah’s forced ark travel…”, and other grat deal of suppositions and theories.

But how and where had really happened creation of human? Does the place of creation, the origin of humanity begin from the same place indeed? That is, is the forwarded, mostly assumed theory on creation of human true? Or we will have to seek for this truth in hundreds of other theories? Perhaps, we will have to seek for answer of this question that concerns us, in history, under deep layers, on the surface of ground, or on the peak of precipitous cliffs again?

Looking through all assumptions we see that it is more logical to base on the last mentioned. The very truth hides in the history. But we need stronger, more convincing facts to solve such deep, logical, very thoughtful and complex matter. Thinking of this we cannot leave subconscious approaches beyond attention, on the contrary, this factor is the most confident fact that can be helpful for us, and belief in this assumption is very big. And we, staying just on this approach, will try to consider the matter on how and where the first humans were created.

Subconscious thought – is an idea that comes in human’s mind, intellect, sense in indifferent form not depending on himself. In most cases there are also external approaches considering this idea called subconsciousness thought by us, this human thought as hereditary transfer.

After clearing up this matter that is one of the most important ones, just one factor is remaining: On which nook of the world the first human had “appeared”? Maybe, most will think that it does not matter. Certainly, it does not have so much difference, but we cannot find the plase of rescue of the present civilization not identifying the place of creation of the first human. Because in all probability theories concerning human’s creation it is stated that salvation of the human is in the place of his creation. Just for this reason it is very important to determine the place of creation of first human. At the present time the widescale “war” proceeds in direction of discovery of the place of human’s creation. Let’s clear up why the “war” proceeds.

The main object of this “war” is that the all nations try to prove the world that just they were the humans being firstly created in the world. The countries, the states, different races continue uncompromising competition in this direction. But in the end recognizing and finding out where the first human’s creation had started, unfortunally, they prefer either keeping silence, or guiding the mankind on falce direction by making unfounded, false and mendacious records. In spite of all these they do not always succeed in holding back the truth.

At this point, referring to great art work created by diction of subconscious thought or idea, we will try to inform of undeniable and very important fact which interests the mankind. Though it seems not so convincing that the man whom we are going to speak about was acquainted with Azeraijan intimately, in any case, we will have put the truth forward again saying that he was informed of that Prophet Noah had come to these places and had chosen just Azerbaijan during the Flood.

This man is the famous artist Salvador Dali. A great painter in the literal sense of the word. He has hundreds of inimitable works. But among them there is an inimitable, fascinating paint work attracting salvation of mankind, which one can contemplate endlessly and at the same time cannot treat perfunctorily. In this work Salvador Dali unexpectedly chose Azerbaijan as salvation place of the world, and showed our country as a target. We can say it with full confidence, becaue the paintwork itself dictates it to us. The paintwork is called “Salvation of Mankind”.

It is not a secret to anybody that the first human of the world was created just here, in our native Azerbaijan. Thought the scientists, archeologists, anthropologists, historians of other nations and countries, know it, but try to hide it zealously, using all possible means. But “great truth” sounds loudly.

In this case it appears the question that takes us to the truth. How it can be that Noah could not find a place to drop the “anchor of his ark” in any point of the world, and “got stuck in Gamigaya”? Our grandmothers weaved the carpet called “salvation of the world” which is of the same name with Sumerian’s chronicle. (This ancient carpet is saved at present in the museum of carpets in Nakhchivan). One more evident proof: the fact that the Azikh cave in our country is the most ancient human habitation of the mankind was confirmed long ago. Gobustan rock paintings not differing from Gamigaya so much and being richer in quantity of exhibits are here too. And there are a lot of other proofs…

All these prove once again that the world civilization started the first human’s creation from our country – from Azerbaijan, and salvation of the world is expected to be here as well.

The painter of genius Salvador Dali also wanted to give this information in his paintwork, and he pointed to Azerbaijan in his inimitable work.

Just like the Prophet Noah, Salvador Dali also could not act otherwise as some power made him to creat this paintwork (directed the Noah’s ark to Nakhchivan). He tried to bring the place of his salvation to notice of the mankind by means of his innate ability. By this he said: – This sacred land has to be protected.

If somebody has doubt about above mentioned, he should thoroughly and repeatedly look at the paintwork “Salvation of the Mnakind” by Salvador Dali, a painter of genius. He saw the place of salvation of the world in the place of its creation – in Azerbaijan!!!

After clearing up and realizing all these we can say with full certainty that in not so far future, after the mankind gets to know about its salvation place, our sacred land Azerbaijan will turn into sanctuary.

Note:  You can get information about the paintwork by this link: