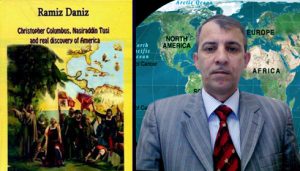 The book is about obscurities of the history of scientific investigations and geographical discoveries including actual issues, which haven’t been discovered and analyzed enough.

The author of the book Ramiz Gasimov Ali is a veteran of Karabakh war and works in the Oil Refining Factory of SOCAR as a worker. He has graduated from secondary school only. He has started his literary activity owing to his passion and diligence. R. Gasimov’s life and activity is very interesting. His trilogy consisting of “Tragic death of conquistadors on coasts of the Central Chile”, “Sacred mission” and “People going to heaven go to hell” was published during last two years. Those historical adventure books could attract attention of Chingiz Abdullayev, Nusret Kesemenli, Natig Resulzadeh and other remarkable writers and poets. The secretary of the Union of Azerbaijani Writers Chingiz Abdullayev called Ramiz Gasimov a writer-innovator.

Though America was discovered 500 years ago, that discovery is still interesting for most experts as it is very enigmatic. Ramiz Gasimov could explain most details about discovery of America. This book includes answers of most questions, which were enigmatic during centuries.

Following questions are interesting for every student, historian, geographer and other experts:

– Why coasts of the New World were named America in honor of Amerigo Vespucci, but not in honor of the well-known sea traveler Christopher Columbus?

– How could the professional navigator and sea traveler Columbus write 400 instead of 220 when determined geographic latitude, where Cuba was situated.

The author answered these questions in this book. Investigation of results of Columbus’s travels towards coasts of the New World was very interesting for scientists of Azerbaijan besides experts of America and Europe. One of such experts is Ramiz Gasimov. He has proved that, the well-known sea traveler Ch. Columbus hadn’t discovered America by accident. Besides it, the author wrote that, Columbus had discovered America according to the map made by the remarkable Azerbaijani scientist Nasiraddin Tusi in Maragha observatory. R. Gasimov proved this truth by means of several facts. He solved this problem, which was urgent for a lot of scientists, independently.

The world community should know that, besides Italy and Spain (Columbus was an Italian, but his expedition was organized by Spain), Azerbaijan also had a great role in discovery of America made in 1492 owing to Nasiraddin Tusi. Everyone, who doesn’t believe it, should read the book written by Ramiz Gasimov.

I want to note that, the author has made a lot of investigations and researches in order to find answers of above mentioned questions in spite of difficulties of the transitional period.

The author has analyzed a lot of materials about Columbus’s travels including trade and economic relations of the corresponding period. He came to the conclusion in accordance with gathered facts, information, made comparisons and logical judgments.

R. Gasimov wrote that, Ch. Columbus had analyzed N. Tusi’s scientific heritage and he deceived Spanish monarchs Ferdinand and Isabella when declared that, wants to find ways to Chine, Japan and Chine and so, could make them to organize an expedition. The well-known sea traveler knew that, he should sail towards unknown territories located in the west of Europe. He kept it secret for his own purposes. Organizers of the expedition – Spanish monarchs also thought that, they had deceived Columbus. They planned not to give him corresponding privileges after the expedition would be completed successfully.

Columbus started his travel very decidedly and it didn’t happen by the accident. He had learned a lot of things after analyzing scientific works of Nasiraddin Tusi including his map. N. Tusi wrote that, there was a very large land area in the west of the Old World, on the other side of the ocean. The scientist’s map included outlines of that territory, the distance between it and Europe and directions of currents, which could be used in order to sail there. So, Columbus knew when he would reach unknown territory. The rebellion of seamen occurred near coasts of the New World proved it as the commander of the expedition asked for only there days in addition. Guanahani Island of Bahamas was discovered twenty six hours after added period, on October 12, 1492.

Ramiz Gasimov Ali has written very interesting work about history of science in Azerbaijan and activity of the founder of Maragha observatory Nasiraddin Tusi. This work may be considered fundamental historical and geographical research work. Injustices of the world have been analyzed in the work by describing activities of Columbus and Tusi. The author wants to correct mistakes made many years ago.

The work written with great troubles and senses of patriotism may be used by pupils, students, statesmen, scientists, experts of history of science, history and geography. The book includes main problems of that time, activities of Columbus and Tusi, political situation of Spain and Portugal, names of the most well-known scientists, sea travelers, researchers, religious figures and monarchs, most interesting travels and Columbus’s real purpose during his travel. The work, which was written in the first year of XXI century, is a great present for people, who are interested in Columbus’s activity, in Spain, Italy and USA and I’m sure that, it’ll cause great resonance in the world and bring great fame to his author and our motherland.

Professor of the department of