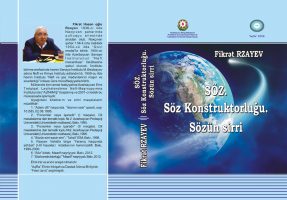 During milleniums there are talks among people about that God after creating holy prophet Adam taught him words and speaking. We meet respective information about it in sacred writings, and mainly in the Qurani-Karim. But up to date this issue has not been studied scientifically, there have not been conducted appropriate research works on linguistics. Therefore, the role of labour and respective theory have been preferred as evolution process in formation of different languages.

As we consider, this theory as well as other theories which had been basically criticized (about formation of language: sound imitation, exclamations, social consent, gestures, labour cries and etc.) cannot be taken as basis in solution of linguistic problems. Because, as language is the research object of linguistics, identification of its origin, as well as solution of other problems concerning linguistics have to be researched in linguistics itself.

The main results of the researches are the followings:

Even within one language the features and duties of many phonemes have ability to repeat each other and to form identity. Obviously, God preferring many-colouredness, variety, wariness principles in conversation, saved human from boredom and even gave opportunity for multivariance on the base of phonemes with identical features, created conditions for generation of homonyms and synonyms within one language, even for generation of different languages being entirely different prima facie and not considered to be relative. Mathematical and variative characteristics were followed here.

It is known that, the simplest words by structure consist of one, two or three sounds, and the more sounds in the word the more complex is the word’s structure. And the phonemes having complex sound cause enlargement of meaning even more. There are very few one-sound words in languages. It is known that in the modern Azerbaijani language there are 9 vowels and 24 consonants. The number of succession variants of possible two-sound morphemes with first vowel and the second consonant sounds is 216. And the same number of morphemes with first consonant and the second vowel sounds make mathematically possible variance of two-sound words. Approximate calculations had shown that in the modern Azerbaijani language 72 words with 110 meanings on the I type of construciton, and 18 words with 23 meanings on the II type of construciton are used as root morphemes, in independent meanings. If to take into account other inner regularities of the Azerbaijani language and conventionalities of occurrence of events in the Universe, as well as on the Earth, it becomes clear that 75 morphemes cannot be used as independent words. So, in general 267 remaining variants play role of reserve for creation of both subordinate and two-sound additional root morphemes. So that to imagine the issue wider, there have been conducted researches for three-sound words too. It became clear that though for the Azerbaijani language the total number of possible variance of three-sound words is 7128, now in the language there are used 1163 root morphemes having approximately 1396 meanings, that makes 16.3%. Lets show for comparison, for the Russian language these approximate numbers are accordingly 3402, 256, 248 and 7.3%.

As we see from above made calculations God created big opportunities and inner reserves for men for generation of words in any language and for their wide use.

Thereby, linguistics, in spite of its great successes to date, cannot answer a lot of fair questions overstepping its essencial course. That is why every nation used to consider creation of its language absolutely its own merit, and this fact morally estranged one nation from another. As a result, different faithes, sects have been created, the thoughts about unity of the world and universe have remained just in talks and in writing, brotherhood of people has been forgotten, and our holy grand Adam has been withdrown from attention and from his decent rank.

As we consider, on basis of displayed arguments every person thoroughly knowing his native language, alongside with it, will be able to learn easily and fastly other relative and not relative languages as well.(book’s pages 472-474)

BY EDITORIAL STAFF: F.Rzayev’s article devoted to general linguistics problems reached our editorial office together with reviews of professors Afat Gurbanov and Abulfaz Rajabov. Taking into account interesting subject of the author’s views and polemic spirit of the article we considered its publication advisible.