The Constellations are Initial Calendars 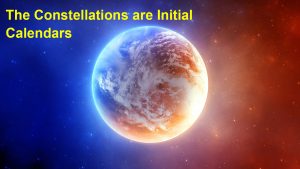 At the stages of history the Noah’s Deluge had happened. The people who escaped that historical deluge continued taking new beginner steps with great belief and faith.

The people of that period kept in their memory Noah’s Deluge and their rescue from that storm, alongside with it, they saved in history that period by means of symbols on stones, rocks and inscriptions. Therewith, remembering that salvation period related with the Savior they constructed Sun temples, seeing flowing water, soil, rocks and mountains as their saviors, they appraised them as divinity.

In the following historical periods the people remembered start of arrival of human child in the world with water, and his return from this Earth world – with water ending.

Those rescued people taking for their saviors, merciful and kind the vault of heaven, the Sky, the Sun, looking at the Sky with hope, with belief, found out who was a Savior, Rescuer, Protector and who was Those who had been saved. That is, the Savior is Tengri, the Rescuer is Prophet Noah’s Light, the Protector is the Light, surrounding stones, rocks, and the humans are those who were saved. It was again beginning and continuation of a great belief.

To return to great belief and to protect it was necessary for that period. Because  falsification, bad relations between people on the Earth before the Storm was the end, conclusion of their harmful, fatal behaviour. In that period before and after the storm the people used to live in accordance with Vault of heaven, with symmetrical order of the stars moving on the sky scoping definite period of the life on the Earth, periods of sowing and reaping, irrigation, harvesting, calming the ground, looking at symetrical order of the sky objects, i.e. the stars behaved in accordance with the period.

As the stars on the vault of heaven always move not confusing their secuence, that symmetric collection of stars was accepted as a “constellation” – a peak, undisturbed consecutive movement and a mover.

Rescued people started constructing dwelling settlements at the stages after the water vanished. Alongside with it, at the following stages they started constructing temples, The Light temple, thanksgiving temple. Four elements, i.e. the element of four corners was saved in consruction and architecture. Those three corners were for observing the Sun, and the fourth corner was known as the corner of call.

It indicates movement of the sun in the trajectory of sunrise and sunset. The fifth element in the center of the element of the Vault of heaven (then called the dome) within the temple (the dome which spreads the sound everywhere with equal sound frequency even if you whisper) was constructed with the meaning “The Master of the Universe hears you even if you whisper”.

The storm of the Noah’s period exists in history. On the eve of the Storm the people of that period was looking for the Sunlight amidst the thick black clouds. They were looking for sunlight on the sky hoping that if they sow the sun the black clouds would move away (afterwards the people started using the phrase “black clouds are flying over our heads”).

Those people who rescued from the storm got one beliefe and faith that “we rescued in water, from water with water”, and with this memory they made that eve the memory (because there was not a calendar then).

But in which period that storm happened, and with which sign was that time saved in memory? Remembering the order of seeming stars at that period as “Water flow, Water time”, noting that constellation as “Water pouring, Water flow” time they gave name to the sky object on the sky at that time. But when did it happen? They remembered the storm on February 11-18 (February is the name given to monthes at the following stages), i.e. when Aquarius constellation covered the Caucasus territory. During January-February the “Aquarius” constellation is observed from the territory of the Caucasus. In Azerbaijan the days of the Aries constellation on March 18-21 are celebrated as a holiday, and this time is celebrated as the time of start of life on the Earth.

Though the historical storm happened at the period of February 11-18 long years ago, the people living in Azerbaijan and Nakhchivan carrying it from memory to memory during centuries remembered that period as Big Chilla (period of forty cold days of winter from the beginning) and Small Chilla (period of the last twenty days of winter), and celebrated as Khidir holiday; saved it in history as the period of salvation of people from water. Remembering Khidir as a holiday they fried seeds of grain-crops in “sajs” (iron disk for baking) celebrating with joy and happiness that old period when the water, coldness started vanishing, when ground warmed, grain-crops began to sprout.

In different periods military invasions were made in Azerbaijan and Nakhchivan, and in historical stages there were efforts to alienate that historical stage and territory by different mythes, legends, narrations and tales, though Noah’s grave and tomb in Azerbaijan, in Nakhchivan, and the Prophets in divine books informed the mankind about the deluge.

There are still met different fiction history, name and territory falsifications. But in historical stages, in ancient world history the personalities, saviors, the stage and territory of arrival of divine books on the Earth are undeniable historical facts. Because more Supreme Master exists and will exist forever for delivery and establishment of those stages, those saviors, those divine books to mankind on the earth. He is Eternal, but humans are compelled to return.

So many human come on the earth, and so many human returned from the earth; did knowledge, the territories sent to the earth from the Heavens change? Can Master’s absolute View, His absolute Establishment change? Human, land changes, but territory does not change.